The actress stars tonight on Starz Edge in The Lookout.
By Allison Moore

Washington, D.C. (July 29, 2008) — Following our extremely popular contest, ‘HD Hottie Hysteria,’ we’ve started a new feature in which we will highlight a top female star every day. The gorgeous female will come from a program that can be seen in gorgeous high-def that very day.

Today’s ‘HD Hottie’ is Isla Fisher, who stars tonight in high-def in The Lookout on Starz Edge at 9 p.m.

The 32-year-old actress, who was born in Australia, started as a soap opera actress in her native country. But her first big break was landing the role of Vince Vaughn’s girlfriend in the smash 2005 comedy, Wedding Crashers.

Since then, Isla has starred in The Lookout, London, Wedding Daze and Hot Rod. Her most recent film was Definitely, Maybe with Ryan Reynolds. Her next movie will be Confessions of a Shopaholic, due out in 2009.

Isla is also well known for being the fiance of comedian Sacha Baron Cohen, a.k.a. Borat. 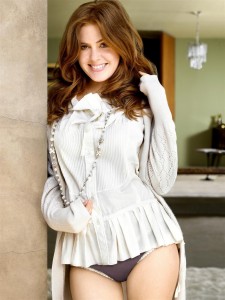 Welcome to Isla Fisher Fan. A fan site dedicated to the incredibly talented Australian actress Isla Fisher. You may know of Isla from the films “Confessions of a Shopaholic”, “Wedding Crashers”, “Now You See Me”, “Bachelorette”,  “Keeping Up with the Jonseses” and many more. Isla-Fisher.org brings you the latest Isla news, event photos, screen captures, photoshoots, and more.

A rebellious stoner named Moondog lives life by his own rules.

A satirical take on the world of the super-rich that tells the fictional story of a retail billionaire, and is set in the glamorous and celebrity-filled world of luxury fashion, with a build up to a spectacular 60th birthday party in an exclusive hotel on the Greek island of Mykonos.

© 2018 Isla Fisher Fan / Theme by Sin21 / Back to top / Homepage
All images, articles, videos, etc. are copyright to their respective owners and no copyright infringement is intended. Please contact us if you have any questions or if you would like certain content or images removed. This is a 100% non-profit fan website made by fans for fans. We have no affiliation or contact with Isla Fisher or her management. This site simply exists to support Isla’s career.